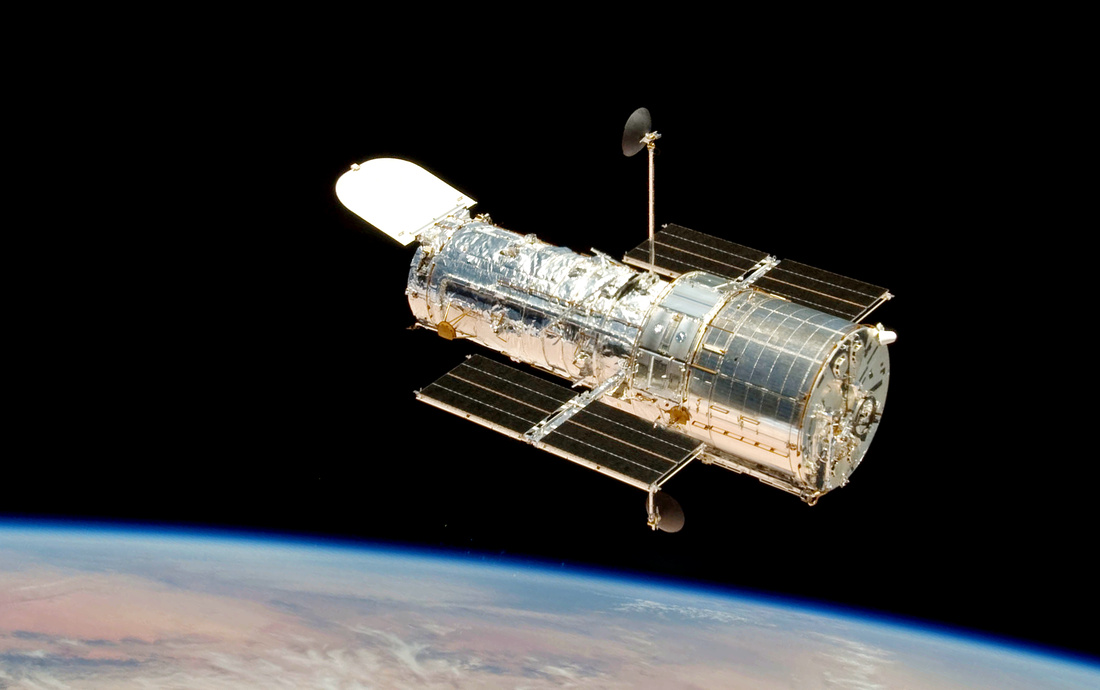 I spent most of my career working on the Hubble Space Telescope mission. Hubble is a satellite orbiting the Earth that gathers data to study the universe. I had the privilege of producing a lot of images from Hubble data that were distributed to the public through news media, online, etc.(https://hubblesite.org/). But nobody has been able see the telescope itself up close since it was launched into space, except the few astronauts who rode the Space Shuttle on five missions to service and upgrade Hubble (and now that is no longer possible, with the retirement of the Shuttles).

While the Hubble Telescope has been watching the universe, I have been watching Hubble go by in the sky, or trying to. Hubble is visible in the sky like many other spacecraft. Well, a lot of other spacecraft are much easier to see. The International Space Station is very bright (only the Sun and Moon are brighter sky objects) because it's very big and it passes high overhead frequently because its orbit is highly inclined relative to the Earth's equator. Even though Hubble is large (about the size of a city bus), it's much smaller than the ISS and its orbit is inclined only 20º or so to the equator so is always low in the sky from more northerly latitudes, like the mid-Atlantic. It is so faint that it's really hard to see, but I have been able to capture it in photographs at least.

Visible passes are rare enough that you have to know where and when to look. Fortunately software is available to help. I use an amazing program called SkySafari that is a general-purpose sky simulator, showing the view of the sky from anywhere at any time, including the Solar System, stars, deep sky objects (nebulae, galaxies, etc.) as well as Earth-orbiting satellites. It will predict when spacecraft will be visible and even send notifications when they are rising, which is a great way to catch these relatively rare events.

I have photographed Hubble passes a few times, from three different states as it happens: Maryland, Utah, and Indiana. The first time was in March 2018 when I still lived in Maryland. This photo shows Hubble's path in the glow of lights of suburban Ellicott City, Maryland, along with a number of stars and a few aircraft. The path is interrupted because this is a composite of several 15 second frames with a roughly one second gap between exposures. The path also varies in brightness; the light we see is reflected sunlight, as the angle between us, Hubble, and the Sun changes, different parts of the telescope reflect varying amounts of sunlight.

I also caught a pass of Hubble from Capitol Reef National Park in Utah while I was an artist-in-residence there in June 2018. As before, the photo is a composite of several 15 second exposures with a small gap between them.

Most recently was shortly after moving to Indiana and not planned out as the other opportunities. I was out shooting at night and got a notification from SkySafari that Hubble was rising. Since I was already set up for night sky photography, I was able to shift around and point to the right part of the sky and just barely caught the faint trail. Even thought the sky was fairly bright from a rising moon, there was a faint trace of the Milky Way as well. I have labeled a few prominent features in this part of the sky. The "M" objects are in a catalog of deep sky objects compiled long ago by the French astronomer Charles Messier.

These may not be awe-inspiring photographs, but it has been fun and rewarding to chase Hubble and capture even a faint glimpse of this amazing contraption that has allowed us to learn so much more about the universe. I also can't help thinking about the army of talented, dedicated people who conceived, built, serviced, operate, and use the data from this magnificent instrument.

Cesar Madisyn(non-registered)
This post about hubble watching is brilliant! I would like to know if I can use the information here in my http://www.topreviewstars.com/dissertation-writing-service/ paper. All my readers will appreciate this.
No comments posted.
Loading...
Subscribe
RSS
Recent Posts
Venus in the Daytime Photographing November's Lunar Eclipse Perseid Meteor Shower A "New" Star Icy Bubbles A Touch of Winter Exploring the far reaches of the Solar System A Bright Spot in 2020 A Great Conjunction Looking back on 2020
Keywords
photography sky astronomy astrophotography night stars Moon Solar System planet
Archive
January February March April May June July August September October November December
Copyright © Zoltan G. Levay
Powered by ZENFOLIO User Agreement
Cancel
Continue