Nova Cas 2021A nova in the constellation Cassiopeia, along with an open star cluster, M52 and a star-forming nebula, NGC 7635, the Bubble Nebula.

I managed to catch a nova the other night! No, not the terrific PBS science program (which I do try catch as often as possible), but a star that suddenly brightened and was first observed a few days before. I was able to photograph the nova among a lot of other stars and a couple of other interesting features of the night sky. More about that later.

But what's a nova? Nova is the Latin word for "new" and was used long ago to describe stars appearing in the sky for the first time. Later when astronomers were able to study the light from some of these stars in more detail they found that they weren't actually new, but stars that brightened dramatically in a short time so we could see them from much farther away. This particular one, known as Nova Cas 2021 or V1405 Cas was discovered in the constellation Cassiopeia (Cas). It is now bright enough to see in binoculars and photograph with modest equipment. It also shares the view with an open cluster of stars, Messier 52 (M52), at top center, and a nice star-forming nebula, NGC 7635, known as the Bubble Nebula for the interstellar cavity being blown by a bright, young star, at lower right.

The nova is near the center, similar in brightness to a few nearby stars, identified in the next image with their brightness in astronomers' magnitude scale (larger numbers indicate fainter light). All of the stars in this image are fainter than we can see with the naked eye. But a composite of several long exposures with a sensitive camera and moderately large lens show a lot of much fainter objects. Before the outburst, the star was very much fainter but was observed and catalogued as CzeV3217, a special kind of binary star known as a W UMa-type eclipsing variable, some 5,500 light years away. 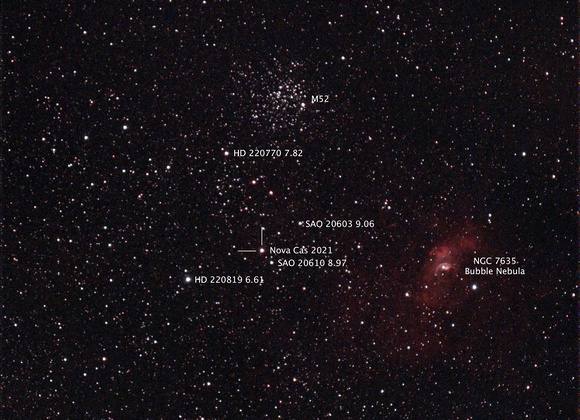 Nova Cas 2021 (annotated)A nova in the constellation Cassiopeia, along with an open star cluster, M52 and a star-forming nebula, NGC 7635, the Bubble Nebula.

By studying spectra (the distribution of the light across colors/wavelengths) and the light curve (the change in brightness over time), astrophysicists can classify novae (the Latin plural of nova) into different types. Nova Cas turns out to be a "classical nova" in which one of the stars in a close binary system (a pair of stars orbiting each other) transfers some of its mass to its white dwarf star companion, which eventually results in a tremendous nuclear explosion that we can see across the galaxy. A white dwarf is a star that has used up all its original fuel so nuclear fusion reactions in its core have stopped and has contracted to a very small fraction of its original size, and is producing light from the heat generated by the compression of its remaining material by the tremendous gravitation.

A nova is a very energetic explosion, but puny compared to the catastrophic event known as a supernova in which an entire star can be blown apart. Supernovae can be so bright they outshine the entire galaxy in which they reside, and can be seen to the farthest reaches of the universe. But that's another whole story.

Here's an article from Sky & Telescope with more information about the nova: https://skyandtelescope.org/astronomy-news/observing-news/bright-nova-erupts-in-cassiopeia/.

VPN software free(non-registered)
What is the positioning of the pole star. Does stars more hotter than the sun.
domanton(non-registered)
Nova Cas turns out to be a "classical nova" in which one of the stars in a close binary system (a pair of stars orbiting each other) transfers some of its mass to its white dwarf star companion, which eventually results in a tremendous nuclear explosion that we can see across the galaxy.
No comments posted.
Loading...
Subscribe
RSS
Recent Posts
Perseid Meteor Shower A "New" Star Icy Bubbles A Touch of Winter Exploring the far reaches of the Solar System A Bright Spot in 2020 A Great Conjunction Looking back on 2020 Following a Giant Sunspot A Story of Iris
Keywords
photography sky astronomy astrophotography night stars moon planet winter black&white
Archive
January February March April May June July August September October November December
Copyright © Zoltan G. Levay
Powered by ZENFOLIO User Agreement
Cancel
Continue