When I worked on the Hubble Space Telescope mission, I made a lot of images from Hubble data that revealed amazing landscapes of space. You can see these images at HubbleSite. Aside from the remarkable colors, resolution and sharpness of the images, one of their other defining characteristics was how small a piece of the sky they showed; in more technical terms, their "field of view" was very narrow. One mind-boggling factoid is that it would take about 24 million separate images for Hubble to view the whole sky! This sometimes seemed like a frustrating limitation because I wanted to see more of many of the amazing targets Hubble was able to look at. But on the plus side, the relatively high resolution cameras were able to record exquisite details in those small fields. We sometimes were able to make wider views by stitching multiple images together to make incredibly high resolution panoramic images. One of my favorites is the Carina Nebula Mosaic.

In reality, this is a vast expanse of space covering some 50 light years across, an incomprehensible 300 trillion miles. Yet it's so far away that it appears only about 1/2 degree across in the sky, roughly the diameter of the full Moon. It took about 50 separate Hubble frames to cover this area.

In contrast to Hubble's narrow view of the sky, our eyes take in a very wide view and most normal camera lenses we use, even the longest telephotos, also show a relatively wide field of view. This was brought home to me recently when I started to take more photographs of the night sky with my relatively limited equipment. We're not talking about some of the large, high-end telescopes that many amateur astronomers have these days. I have been using off-the-shelf cameras and lenses mostly, taking a lot of wide-angle views of the night sky, including the Milky Way, mostly in the background of interesting landscapes. I enjoy these juxtapositions of the more familiar Earth-bound scenes with the larger universe that becomes visible at night (from a dark site at least). The lens I use mostly for these is 20mm focal length which provides a whopping 84x62 degrees wide field, much wider than what we normally take in visually. But it is able to capture a large stretch of the Milky Way in a single frame. 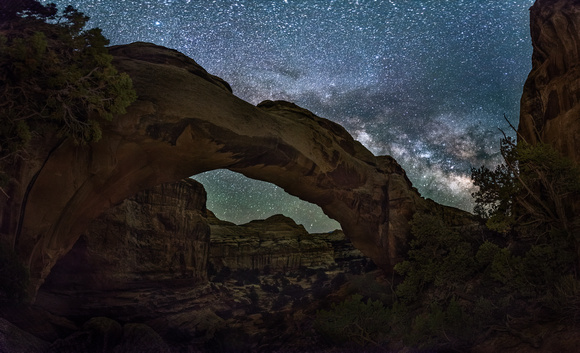 This photo shows the Hickman Bridge, a natural stone arch in Capitol Reef National Park in Utah. I was able to find a place to stand where the Milky Way would rise above the arch. Capitol Reef is quite remote so the sky is very dark. So dark in fact that taking photographs exposed well for the dark sky also captured some detail in the landscape, illuminated only by the light from the sky.

But sometimes you do want to zoom in to see details more clearly, as you may want to capture distant wildlife, so you need to use a longer focal length. Aside from a small telescope of 1250mm focal length, the longest telephoto lens I have is 500mm, the long end of a 200-500mm zoom, an amazing piece of equipment. Its field of view is 4.2x2.7 degrees with my full-frame DSLR. By comparison, the field of view of Hubble's WFC3 camera in its visible-light mode (UVIS) is 2.3x2.1 minutes of arc, that's a factor of about 82 in linear scale (a minute of arc is 1/60 degree). I'd have to put a 57,600mm lens on my camera to equal Hubble's field of view, kinda outside my price range at the moment.

Lately I have been using an 85mm lens to photograph the sky, considered a moderate telephoto, which provides a field of view of about 24x16 degrees, much wider than that 500mm. It works well to capture some interesting details of the Milky Way. I got super lucky recently while using this lens to photograph an interesting part of the Milky Way known as the North America Nebula. Can you see the pinkish shape in the center of the photo below? It looks vaguely like the map of North America, rotated with north to the left in this view. That bright streak is a meteor, a chunk of rock that hit the Earth's atmosphere and vaporized, creating a glowing trail. This happened to be during a meteor shower known as the Lyrids, named for the constellation Lyra. 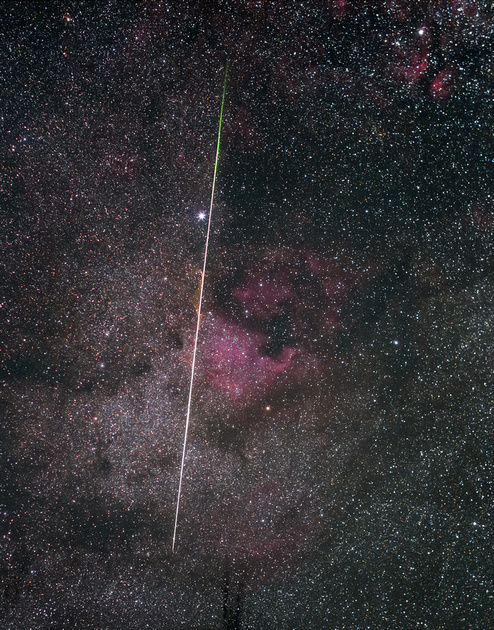 Lyrid Meteor and the North America NebulaThis was taken from Brown County, Indiana on a cold, clear, moonless morning of April 22nd at 3:04am EDT with a Nikon D800 DSLR, converted to record H-alpha, and Rokinon 85mm f/1.4 lens on an iOptron CEM25P mount. It is a composite of six exposures, each 30 sec., f/2.8, ISO 1250, post-processed in Adobe Lightroom and Photoshop. All the frames were registered and median-combined, and the frame with the meteor was added back in Lighten mode.

Here's another meteor captured the same night using the same equipment. I wasn't expecting to get meteors in these relatively narrow pieces of the sky. They are rare enough that you usually need to see large expanses of sky to have a chance to see many of them. I was instead aiming at another celestial target familiar to astronomers, a galaxy known as the Whirlpool. Astronomers also know it as M51, in a catalog assembled long ago by Charles Messier. In this view the galaxy is quite small and hard to see at this scale. 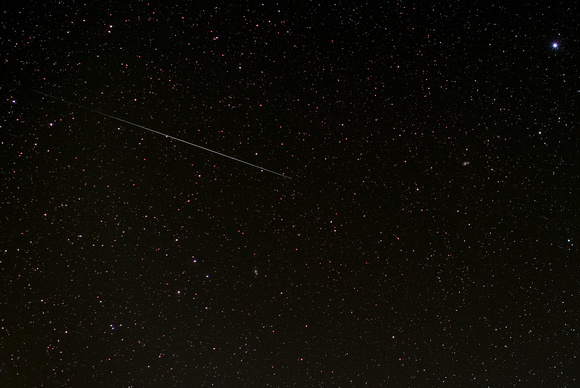 If we crop the image down to about 100 pixels wide around the galaxy, it looks like this. Not an especially impressive result, but I was surprised that with this lens and camera there was any detail at all. We can tell that there are actually two galaxies, and that the larger one on the left has spiral structure. With a longer telephoto lens or a telescope with longer focal length there would be much more detail, using the same camera.

This is the same as zooming in or cropping an image to single out a tree in a wide landscape.

Now here is the view of the Whirlpool Galaxy from the Hubble Space Telescope. That's a lot of detail! The difference between this and my rather pathetic version is a much longer focal length that provides enormous magnification, though limited to a very small field of view. In fact Hubble's view was even smaller; this image was constructed from six separate views, stitched together in a small panorama. It also helps enormously that Hubble orbits above Earth's atmosphere so it does not suffer from the distortion and absorption the air imposes on the light. 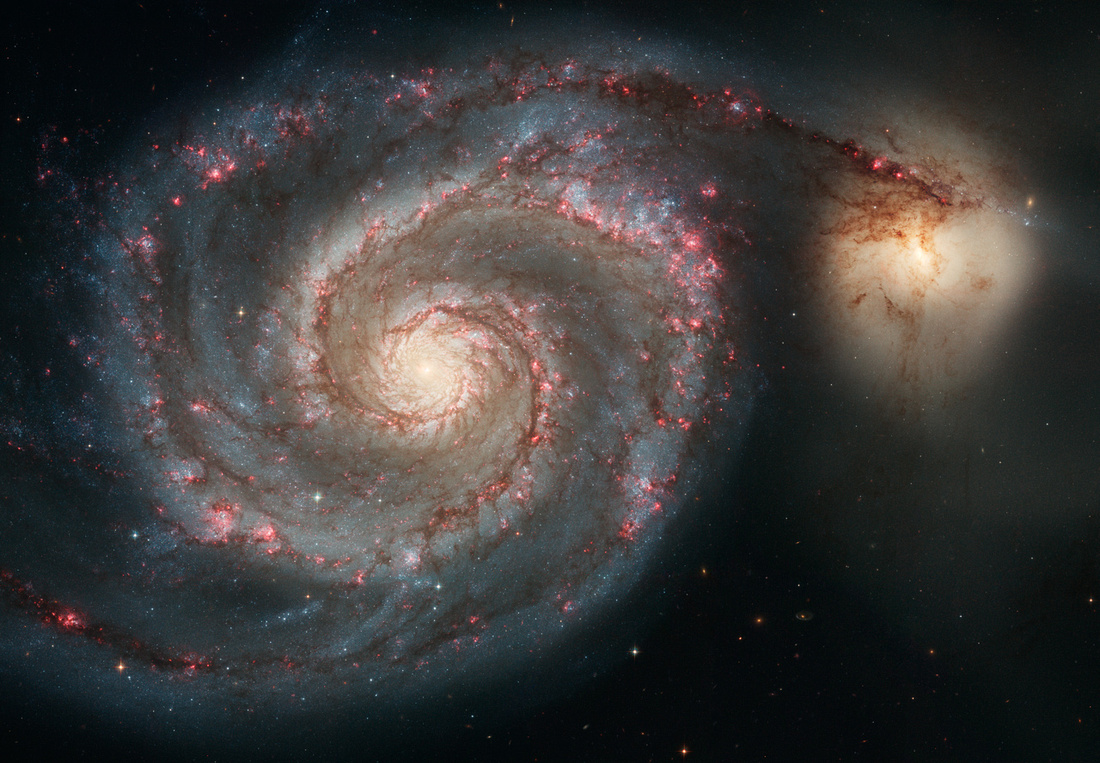