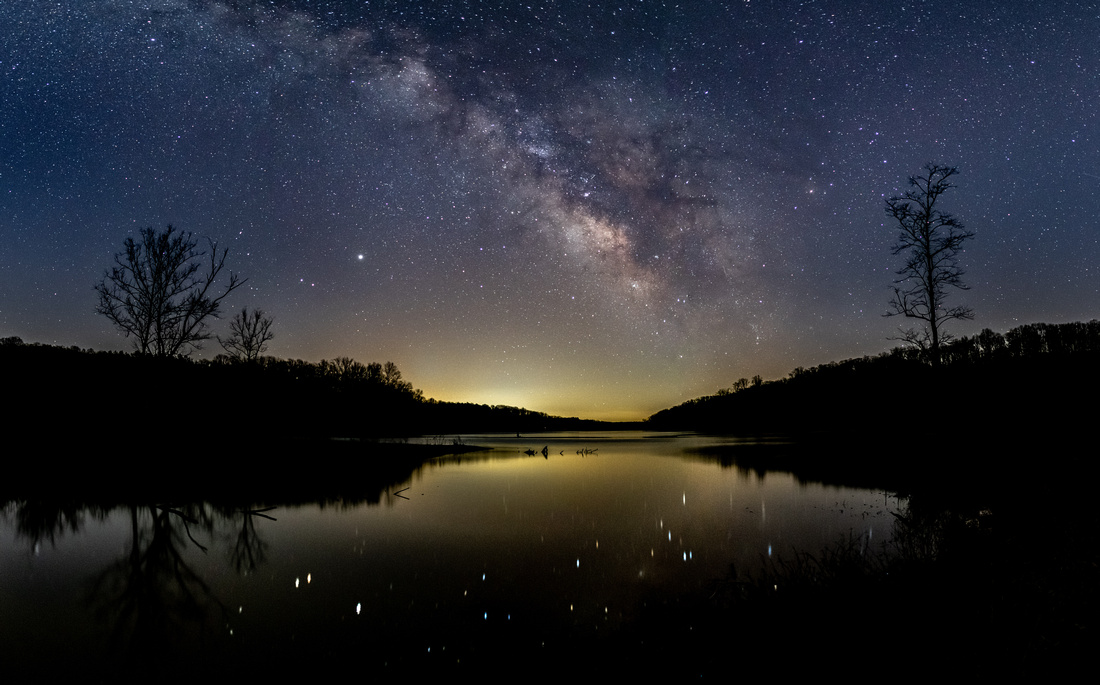 Milky Way over Yellowwood LakeThis early-season Milky Way photo was taken 30 March 2020 at about 6:00am EDT at Yellowwood Lake, in Yellowwood State Forest, Brown County, Indiana. It is a panorama stitched from five vertical frames taken with a Nikon D850 DSLR and Nikon 20mm f/1.8 lens. Exposure for all frames was 10 sec., f/2, ISO 2500. The frames were post-processed and merged in Adobe Lightroom. The three morning planets are visible to the right of the trees on the left: Jupiter, Saturn, and Mars.

It's always a treat to see the Milky Way and I always enjoy getting a decent photo of it, even though I have to miss some sleep. Unfortunately, in winter the brightest part of the Milky Way is not visible, it's above the horizon only during the day then. But early spring brings not only warmer weather, flowers, grass to mow, etc., it also means the Milky Way will be visible again, though only in the wee hours of the morning. Of course it has to be clear and dark to see the night sky, both of which are pretty rare where I live, in Southern Indiana. As the year progresses, the Milky Way rises earlier each night and by the end of summer is visible all night so it's a little easier to get out earlier to catch it.

I was able to take advantage of a clear, moonless night recently, dragged myself out of bed at 3:00am, and got to a favorite spot not too far from home. Yellowwood Lake in beautiful Brown County, Indiana is a good location to see the sky: close to home but far enough from the medium-sized town of Bloomington to the west and smaller Nashville to the east so the lights don't entirely dominate the night sky and within a state forest, with minimal development. The lake is conveniently oriented with it's length oriented mostly north-south so it provides a nice foreground view to complement the sky. If the conditions are right, the lake also reflects the stars making for interesting compositions.

I'm pretty sure the glow on the horizon is from the Louisville, Kentucky. I was surprised that an urban area of its size would be that noticeable from about 100 miles away. But there is not very much development between here and there other than small towns and rural security lights. Also these are deep exposures to capture the faint glow of the Milky Way, which pick up stray light pollution just as well.

Technical details:
This photo is a panorama stitched from five vertical frames taken with a Nikon D850 DSLR and Nikon 20mm f/1.8 lens. Exposure for all frames was 10 sec., f/2, ISO 2500. The frames were post-processed and stitched in Adobe Lightroom. The three morning planets visible to the right of the trees on the left are Jupiter, Saturn, and Mars.

Jenny(non-registered)
The first Milky Way view of the season is upon us! Tonight, we will see a beautiful display of the Milky Way and its surrounding constellations. The sky should be clear and dark, so you should have no trouble seeing it. Here you can read http://bestwritingsclues.com/reviews/speedypaper-review/ article before hiring the best person for your essays.
technology "write for us"(non-registered)
this became a very nice post. In idea, I have to devote writing this way moreover – spending time and actual effort to produce a really good article.
http://www.couponstechie.com/write-for-us.html
No comments posted.
Loading...
Subscribe
RSS
Recent Posts
Venus in the Daytime Photographing November's Lunar Eclipse Perseid Meteor Shower A "New" Star Icy Bubbles A Touch of Winter Exploring the far reaches of the Solar System A Bright Spot in 2020 A Great Conjunction Looking back on 2020
Keywords
photography sky astronomy astrophotography night stars Moon Solar System planet
Archive
January February March April May June July August September October November December
Copyright © Zoltan G. Levay
Powered by ZENFOLIO User Agreement
Cancel
Continue