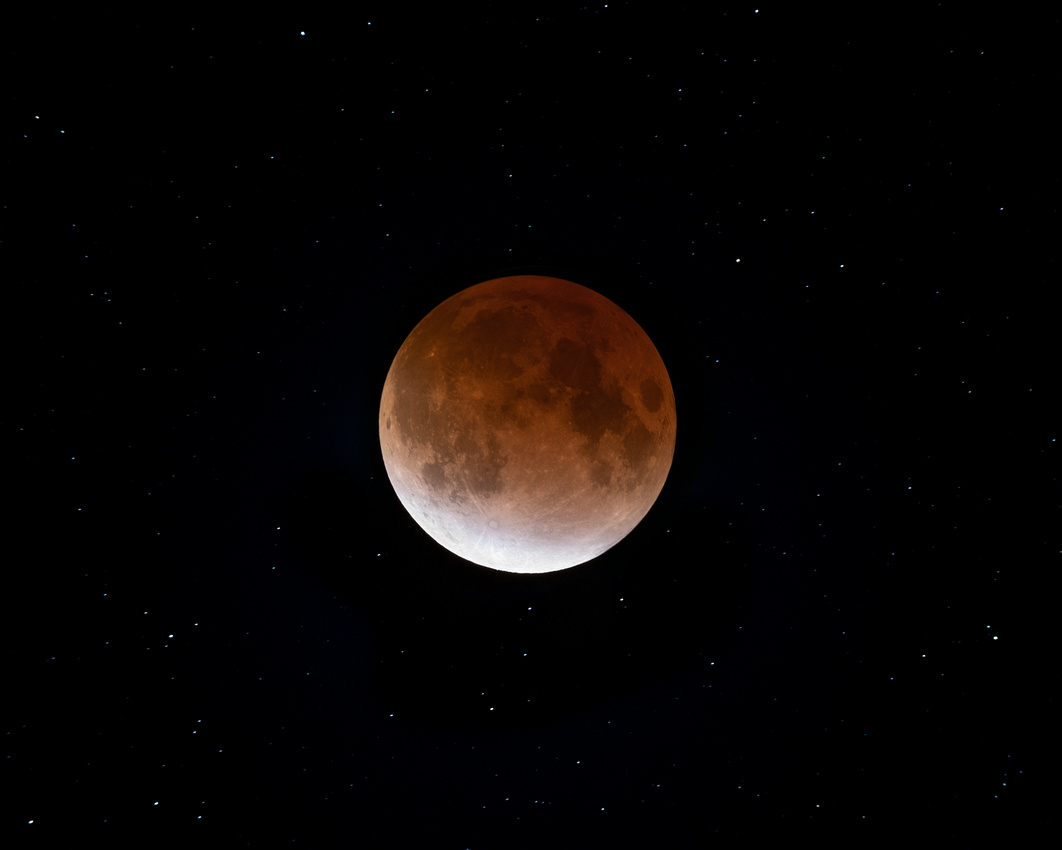 Lunar Eclipse 19 November 2021Partial lunar ecliopse, 19 November 2021, a composite of frames to capture the large range of brightness from the slice of sunlit Moon's limb, the much darker majority of the Moon's surface in Earth's shadow and a much longer exposure for the background stars made during maximum eclipse.

I was struck once again how beautiful a lunar eclipse can be. In the early morning of November 19th the Moon began slipping into the Earth's shadow. Fortunately the sky was crystal clear all night but quite cold. By 4:00am, it was almost completely darkened within the deepest shadow, the umbra, and took on the characteristic coppery color (from sunlight reddened by passing through the maximum amount of Earth's atmosphere, as in the red glow at sunset). But it wasn't just red, the Moon appeared translucent and glowing. And because the Moon's brightness was so greatly diminished, the sky became much darker and the stars reappeared, as on a moonless night. This wasn't a total eclipse, there was still a sliver of the sunlit Moon peeking out from the umbra, but it was deep enough that we got the full effect of the deep shadow on the majority of the Moon's surface.

I wanted better visualize the Moon passing through Earth's shadow, so I put together another illustration from a sequence of images showing the Moon moving across the sky. 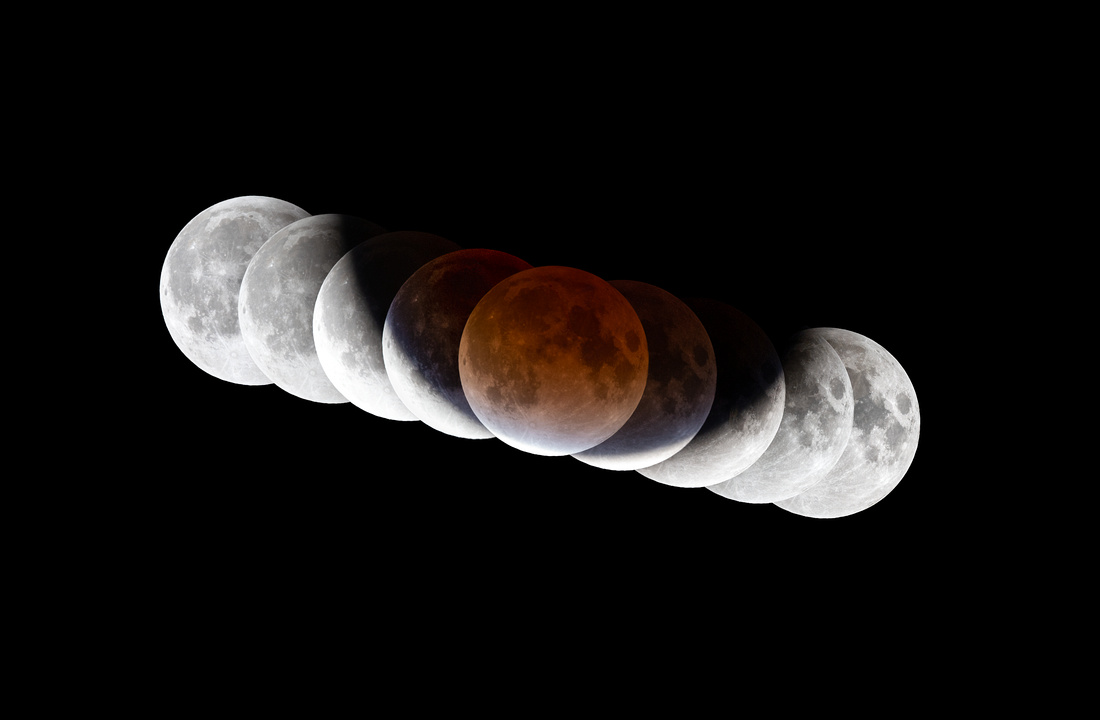 Lunar Eclipse SequenceA sequence of frames of the 19 November 2021 lunar eclipse. The images have been arranged in their true relative position as the moon travels across the sky and through the Earth's shadow. Different exposures have been used to compensate for the very large change in the Moon's brightness as it passes in and out of the shadow.

Without this view, it's always a little hard for me to visualize the relationship of the Moon and Earth's shadow. You may also notice a couple of other things here: the shadow is round (surprise, the Earth is not flat!), and it's as large as the Earth, about four times the diameter of the Moon.

I had taken many different exposures throughout the eclipse because I wasn't sure what the best exposure would be, and the brightness difference is very large, from the bright sunlit side to the darker shadowed side of the Moon; and the camera's automatic exposure doesn't work very well for this sort of subject with mostly black and a little very bright subject. You can see this large difference in the frames just around the center fo the sequence. In the central frame, we see a lot of detail in the shadow, but the bright edge is quite saturated with no detail. In the frames on either side of the center, there is minimal detail in the shadow but more detail in the sunlit portion.

Here's one more result from this long, cold night of Moon watching. I took a time-lapse sequence of the entire eclipse, from before the Moon entered the penumbra (the outer, lighter transition shadow) until after the eclipse, just before dawn. This allowed me to select the best frames for the shadow sequence. And I got some very good images of the full Moon just before the eclipse started. Here's the uneclipsed full Moon in all its glory, pretty much how I see it, except with more detail compared to a naked eye view. 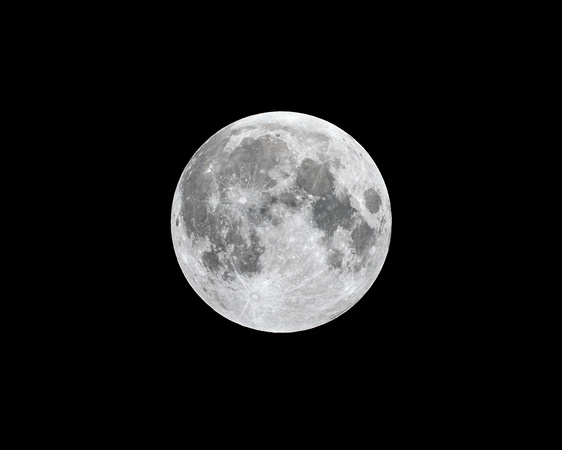 I have made some adjustments in post-processing to bring out the details in the brighter and darker parts of the Moon. Note that it appears quite color-neutral. The Moon's rocks are nearly gray, as the color photos from the Apollo missions beautifully demonstrated. They are also actually quite dark, composed largely of volcanic basalt, but we see it as very bright since it's against the dark sky.

But the rocks are not entirely without color. In this second version I cranked up the color saturation in post-processing (using the Vibrance and Saturation adjustments in Lightroom). Now we can see some of those subtle color differences, which I think are real rather than effects of the camera sensor or processing. I'll leave it up to others to comment on how this might relate to the difference in the composition of the minerals. 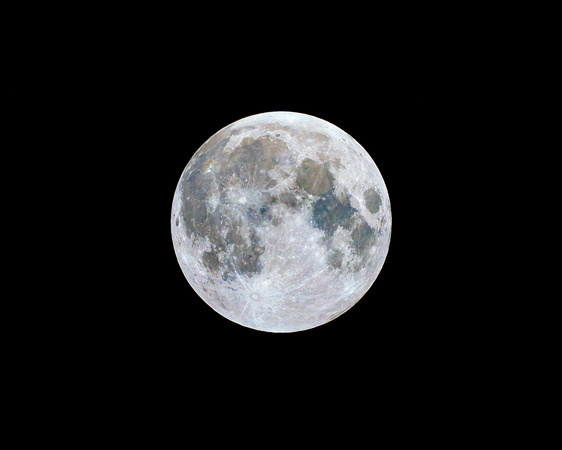 Full Moon color-enhancedThe full Moon taken just before the lunar eclipse on 19 November 2021. The color has been enhanced to show differences in minerals on various parts of the Moon's surface.

All of these images were made with a Nikon Z 6 mirrorless camera, Explore Scientific FCD100 102mm aperture, f/7 refracting telescope, mounted on an iOptron CEM25P drive. The exposure sequences were controlled by the in-camera intervalometer with brackets of 9 frames in 1-stop increments every 5 minutes.

I hope it's just as clear for the next lunar eclipse, coming just around the corner in May 2021. I've learned a lot every time I watch and photograph an eclipse. But perhaps even more important, I enjoy these events for their awesome, natural beauty.

event planning(non-registered)
It's recommended to check the weather forecast, as a clear sky will provide the best viewing conditions. Also, check the Lunar Eclipse schedule on your location, as the event is not visible from all locations on Earth. Overall, Photographing November's Lunar Eclipse is a great opportunity to capture a unique and beautiful event, and with the right equipment, planning and some patience, you can produce stunning images that you'll cherish for a lifetime.
M & A Services(non-registered)
This is a very informative article. I was looking for these things and here I found it!
Graphic Design(non-registered)
vsvsdsvdsvddvsvdsvds
No comments posted.
Loading...
Subscribe
RSS
Recent Posts
Campus Carvings Venus in the Daytime Photographing November's Lunar Eclipse Perseid Meteor Shower A "New" Star Icy Bubbles A Touch of Winter Exploring the far reaches of the Solar System A Bright Spot in 2020 A Great Conjunction
Keywords
photography sky astronomy astrophotography night stars Moon Solar System planet
Archive
January February March April May June July August September October November December
Copyright © Zoltan G. Levay
Powered by ZENFOLIO User Agreement
Cancel
Continue