Venus in the Daytime 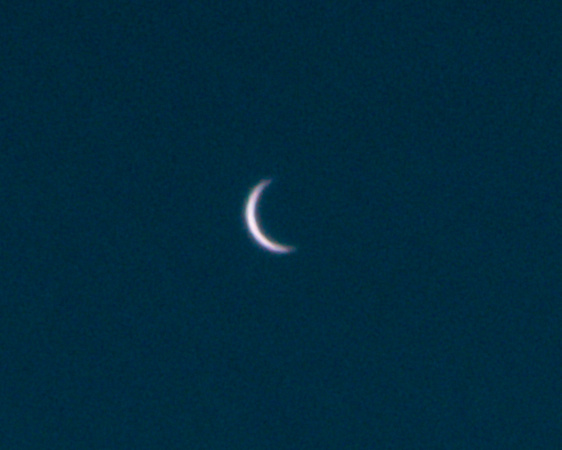 Crescent Venus in DaylightCrescent Venus in daylight, a composite of 30 frames combined in Photoshop (in median mode), which sharpens the image by averaging out the variations in the individual frames mostly due to the turbulence of the air. 30 1/1000 sec. exposures, Explore Scientific 107mm f/7 refractor, ASI294MC camera, dual narrow-band filter, iOptron CEM25P mount, ASIAir controller, processed in Astro Pixel Processor and Lightroom, and combined in Photoshop.

This was something a little different and a bit of a challenge: catching the crescent of the planet Venus in daylight. It's easy to spot Venus at dusk or dawn because it's the brightest planet in the sky. But during daylight, the Sun makes the sky so bright that it's very difficult to see Venus. And it's especially challenging during the crescent phase, when relatively little of the planet's visible disk is illuminated, because of the Solar System geometry; at this phase, Venus is between the Earth and the Sun so we are seeing only the rim of the planet illuminated.

Nevertheless, if you know where to look, and very importantly can avoid looking at the Sun, you can certainly see Venus in the daytime, especially with binoculars or a telescope. And it's a large enough and close enough, the closest planet to Earth and our near twin in size, it resolves into a visible disk with enough magnification.

Since I had the telescope all set up and aligned from shooting overnight, I thought I'd try pointing at Venus the next day. I wasn't sure the pointing with my telescope and mount was good enough to get Venus in the field of the camera, but it did work.

The still image above is a composite of 30 frames, processed in Astro Pixel Processor and combined in Photoshop using a median algorithm, which sharpens the image by averaging out the variations in the individual frames, mostly due to the turbulence of the air.

The atmospheric distortion is quite obvious in this little real-time video, taken with the same equipment. It is more pronounced during the day when temperature differences in the air are greatest from heating by the Sun. Fortunately, it usually settles down at night, but is still there and blurs any images of the sky (and the reason to put telescopes in space, above the atmosphere).