A Touch of Winter 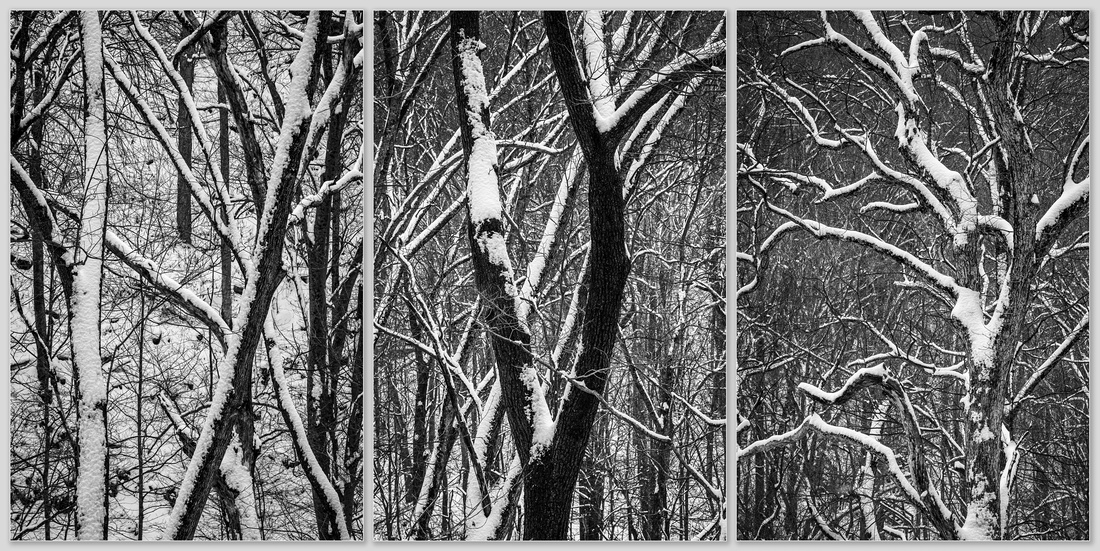 Looks like we are in the midst of some real winter weather for a while, with temperatures well below freezing and occasional snow. I ventured to a favorite nearby state park, McCormick's Creek, to catch up with the woods in winter. It's usually a pretty busy park, between Bloomington, Indiana and the smaller town of Spencer. I guess the 20º temperature kept most of the visitors away though; I had much of the park nearly to myself, including the very popular waterfall and hiking trails. There was enough snow, and little wind, so the trees were nicely outlined in high contrast, giving the sense of an engraving. I thought a few scenes could go together nicely, I call it a "treeptych" (get it, tree/triptych 😉 ).

I might have liked sunshine to have the sparkly look on the ice and powdery snow, but the overcast provided very even, low-contrast illumination. In winter, with the trees bare and especially with snow cover there's very little color in the landscape, so a black & white treatment of these photos enables heightening the contrast and highlighting the forms in nature. 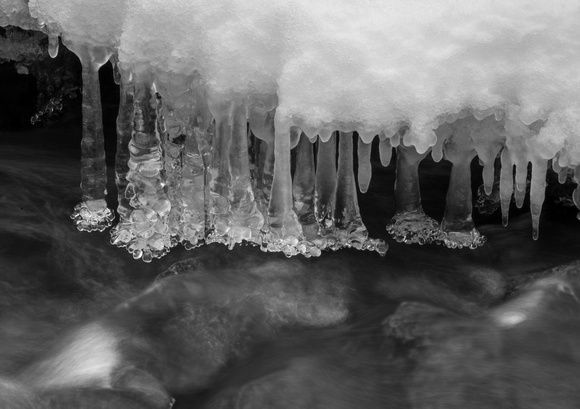 Sometimes it's the smaller details that catch the eye: I love these little stalactites of ice that form along the edges of streams, contrasting with the textures of the snow above and moving water below. 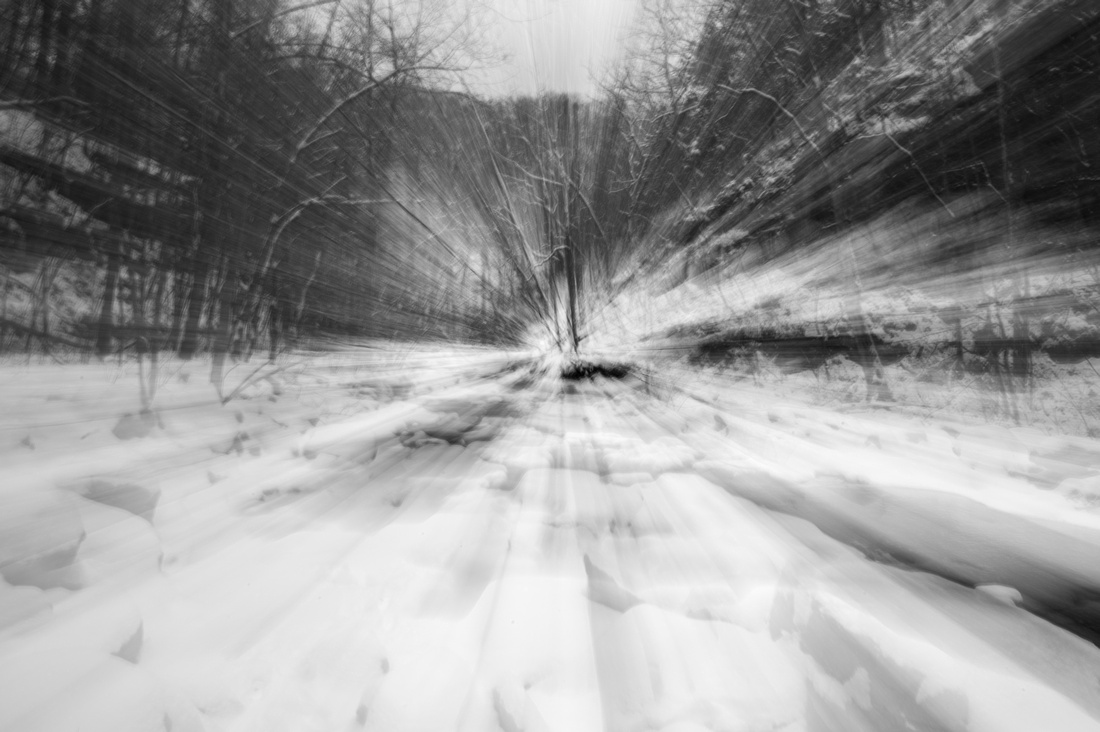 Here's a serendipitous result. Not sure how it happened, wasn't intentional; but pretty cool nevertheless. I know I tripped the shutter accidentally before moving the camera and a guess the lens zoomed during the exposure (1/4 sec.). This is looking downstream at McCormick's Creek, flowing with a fair volume of water but whose rocky stream bed is mostly covered in snow with lots of ice at the edges. Here's the straight shot of this scene — in full color. 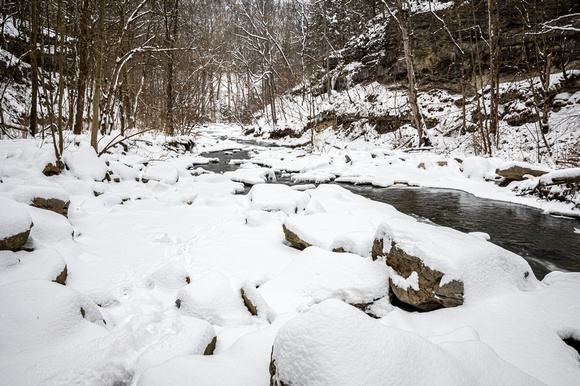 The other direction from this spot is the largest waterfall in the park, aptly named McCormick's Creek Falls, nicely framed in ice. This is a small canyon with a large ledge consisting of two limestone formations being eroded by the creek. Water always seeps through the limestone freezing into great, beautiful icicles in cold weather. 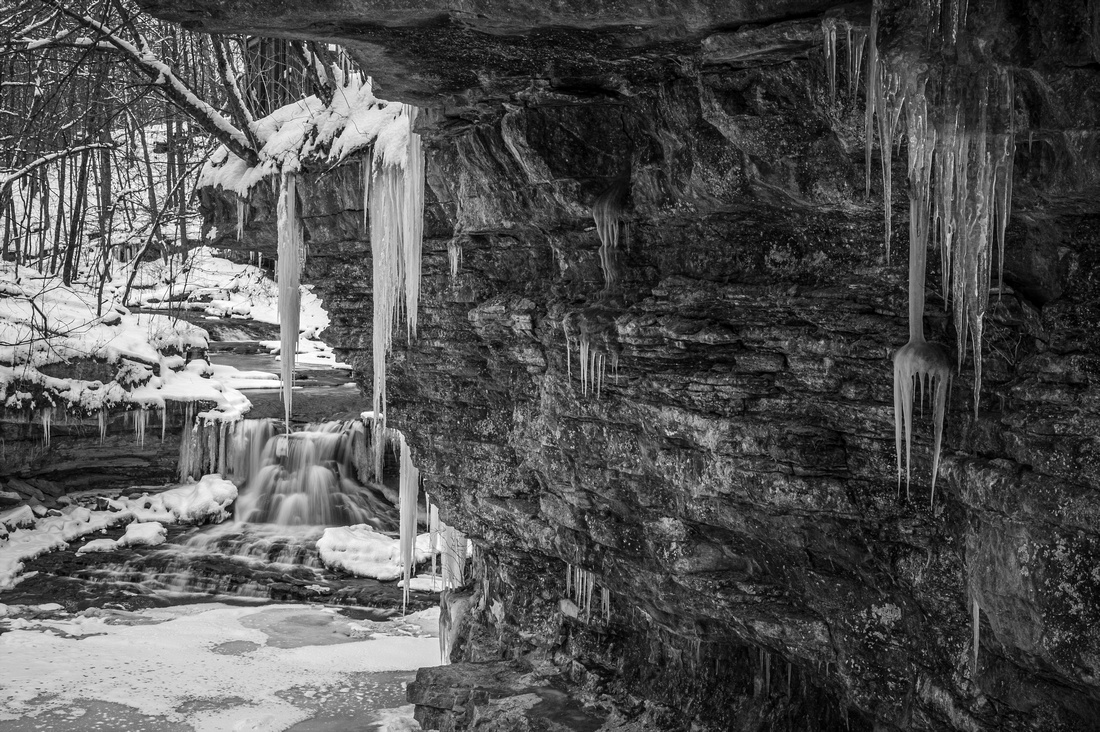 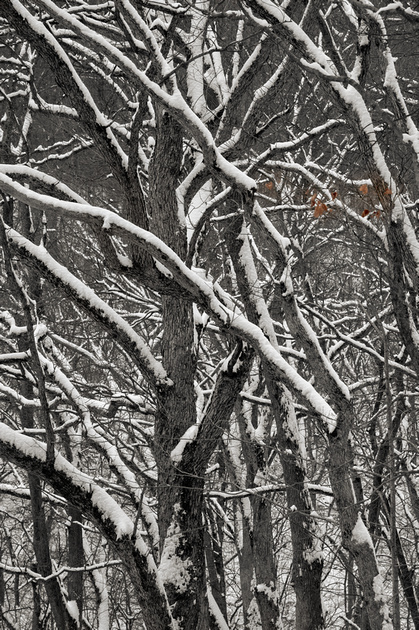 Beech Leaves in WinterA few leaves hanging on beech trees despite cold and snow. The original color photograph was converted to black&white, except for the few warmly colored leaves in the corner.

Among the bare trees, nicely outlined with powdery snow, a few leaves are still hanging on. These are beeches, many of which cling onto some of their leaves until the new ones start appearing in spring and providing some color in the mostly monochromatic winter. There was more color originally in this photo but I desaturated it except for the group of leaves at the top. They leapt out at me at the time but were somewhat lost amid the warm color of the tree trunks but are emphasized even better in this rendering.

Here's a crop of the original. Yes, the leaves are out of focus, I guess they are closer than most of the other trees. 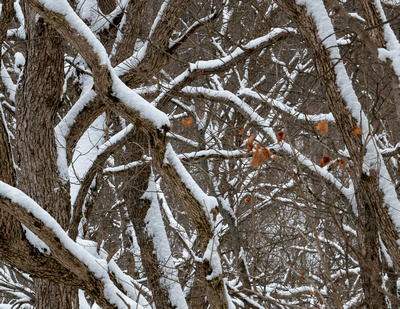 Dean's Tank Inc.(non-registered)
Everyone here at Dean's Tank, Inc., from the service professionals to the office staff, is dedicated to exceeding your expectations. Serving the Twin Cities and all of Minnesota, Dean’s Tank is the most experienced residential petroleum tank contractor in the Midwest. With over 20 years of experience, we will work with your individual needs and will complete the project according to your specifications.
klausfelix(non-registered)
I desaturated it except for the group of leaves at the top. They leapt out at me at the time but were somewhat lost amid the warm color of the tree trunks but are emphasized even better in this rendering.
No comments posted.
Loading...
Subscribe
RSS
Recent Posts
Venus in the Daytime Photographing November's Lunar Eclipse Perseid Meteor Shower A "New" Star Icy Bubbles A Touch of Winter Exploring the far reaches of the Solar System A Bright Spot in 2020 A Great Conjunction Looking back on 2020
Keywords
photography sky astronomy astrophotography night stars Moon Solar System planet
Archive
January February March April May June July August September October November December
Copyright © Zoltan G. Levay
Powered by ZENFOLIO User Agreement
Cancel
Continue