Exploring the far reaches of the Solar System 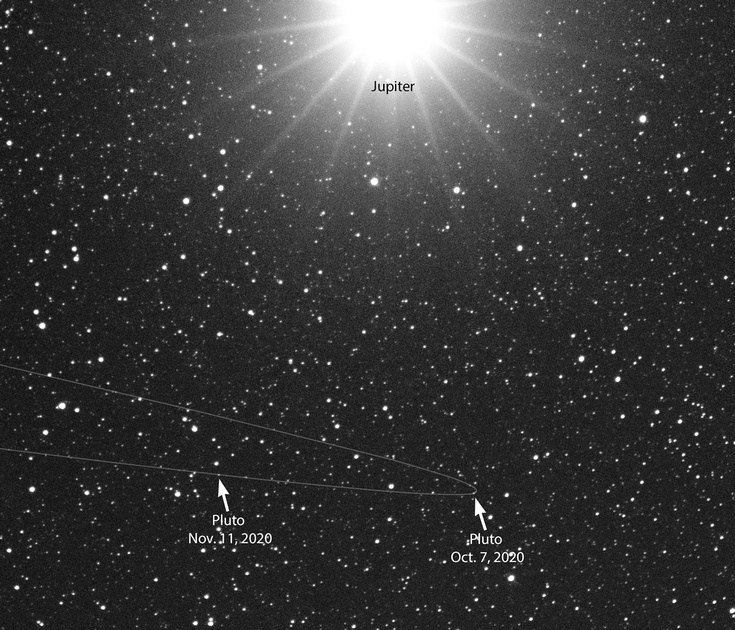 Motion of PlutoA composite of two exposures showing the motion of the dwarf planet Pluto between October 2 and November 11, 2020 against the background stars. Much of this motion is a. reflection of Earth's orbit around the Sun, causing Pluto to appear to shift against the fixed stars.

I guess I'm stuck in Astro 201 these days; maybe I'm trying to relive my youth. But mostly I'm just pursuing long-time interests that I'm able to get to in retirement. This may be a particularly geeky project but I wanted to test the limits of my modest astrophotography equipment and techniques and explore the far reaches of the Solar System along the way. So I thought I'd see if I could capture Pluto in a photograph. You know, that poor, distant rock we learned long ago was the ninth Solar System planet but the evil astronomers "demoted" to dwarf planet status? (By the way, rather than demoting Pluto, astronomers actually promoted several other Solar System residents to planet status — albeit "dwarf planets": the former asteroid Ceres and several Kuiper Belt objects, like Pluto.)

Whatever you call it, it's mighty far away and relatively tiny; much smaller than any of the "real" planets, even smaller than our own Moon. I had no hope of seeing anything more than a dot of course, even the mighty Hubble Space Telescope* can barely resolve any surface detail.

I did manage to take photographs of the proper area of the sky on a few different nights. The top image shows a composite of the two exposures with Pluto's location marked. There was not much chance of confirming it in one frame because the spot of light is tiny and indistinguishable from similarly faint stars, and I wasn't sure of the accuracy of the position in star catalogs. But by waiting and taking another image it was possible to confirm that what I thought was the correct small dot was where it was supposed to be and had in fact moved as expected. This is exactly how Pluto was discovered in 1930 by Clyde Tombaugh, but I had the advantage of knowing where to look, thanks to trusty SkySafari sky simulator software. The curvy line added to the image above shows the path of Pluto across the sky over time. Much of this motion is actually a reflection of Earth's orbit around the Sun, causing Pluto to appear to shift against the fixed stars due to parallax. Pluto does orbit the Sun as well of course, which contributes to its apparent movement, but it travels much slower due to its tremendous distance. The hugely bright object at the top is the planet Jupiter, which doesn't normally appear that bright but is way overexposed in this deep exposure. 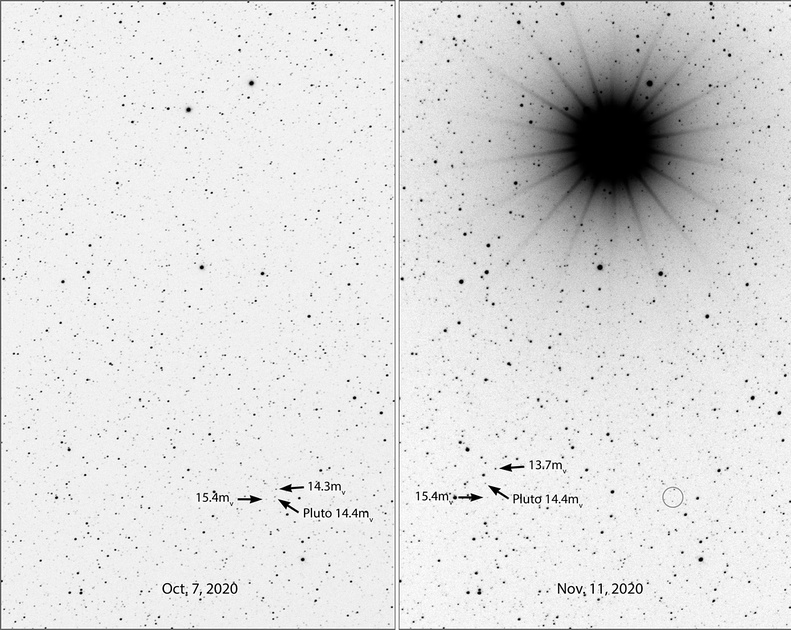 Pluto's MotionTwo exposures showing the motion of the dwarf planet Pluto between October 2 and November 11, 2020 against the background stars. Much of this motion is a. reflection of Earth's orbit around the Sun, causing Pluto to appear to shift against the fixed stars.

Here's another view of the same data: the two separate images, showing the same area of the sky with Pluto's location on the two dates. It's rendered in reverse, astronomers often show images this way because it's usually easier to see fainter objects, which appear darker in the negative. (Also, astronomical photographs used to be made using photographic film and plates, which produce a negative, and it was best to study and analyze the original rather than a positive reproduction, which might introduce distortions or artifacts.) By November Jupiter had joined the fun and I thought the glare would drown out much fainter Pluto. But it was still brighter than the sky background.

I was able to confirm the identity of Pluto not only by its position, but also the expected brightness compared to adjacent stars of similar brightness. The numbers are magnitudes, the units astronomers use for brightness or luminosity, larger values are fainter, somewhat non-intuitively. At each position I found stars that bracket Pluto's brightness. Also shown on the November image is Pluto's location on the October date, showing how far it had shifted.

*Speaking of Hubble and Pluto, a recent Hubble/STScI news release reports on a study to measure the extremely faint glow of light from the distant universe. They used data from the New Horizons Spacecraft that flew by Pluto and the even more distant object Arrokoth in the Kuiper Belt to get beyond the light reflected from dust in the inner Solar System. Though very faint, this relatively local reflected light can be seen even from the ground in very dark skies and is known as zodiacal light (because it is seen along the Zodiac, the swath of the sky in which the planets travel.). I have managed to photograph the zodiacal light on only two occasions, once in Arizona at Canyon de Chelly National Monument, and on Assateague Island on the Atlantic coast of Maryland.

blakeadam(non-registered)
Whatever you call it, it's mighty far away and relatively tiny; much smaller than any of the "real" planets, even smaller than our own Moon. I had no hope of seeing anything more than a dot of course, even the mighty Hubble Space Telescope* can barely resolve any surface detail.
No comments posted.
Loading...
Subscribe
RSS
Recent Posts
A "New" Star Icy Bubbles A Touch of Winter Exploring the far reaches of the Solar System A Bright Spot in 2020 A Great Conjunction Looking back on 2020 Following a Giant Sunspot A Story of Iris With Apologies to Edward Weston
Keywords
photography sky astronomy astrophotography night stars moon planet winter black&white
Archive
January February March April May June July August September October November December
Copyright © Zoltan G. Levay
Powered by ZENFOLIO User Agreement
Cancel
Continue