As an alumnus of Indiana University, I'm glad to now live close to the main Bloomington campus and enjoy walking around the grounds among many amazing buildings and filled with artworks and mature trees. One of the distinctions of the IU campus is that most of the buildings are made with limestone. This is natural since the campus and surrounding city of Bloomington and nearby counties sit on top of a band of some of the finest limestone in the world. It has supported an industry of quarries, mills, and carvers for many generations. The material has been exported around the country for buildings in every major city and many small towns. Among many official buildings and humble houses, significant ones such as the Empire State Building in Manhattan and the Pentagon in Washington, D.C. use Indiana limestone.

In addition to a basic structural and ornamental construction material, limestone is ideal for carving because it's relatively soft but also fine-grained and uniform so can retain intricate details. It certainly takes a skilled artisan to execute a fine carving, and there are many examples on the IU campus, including traditional, classical architectural features as well as many whimsical ornaments and the occasional quotation.

One of my (many) personal photography projects/assignments is to document the limestone carvings on the IU campus. These are a few of my favorite examples. 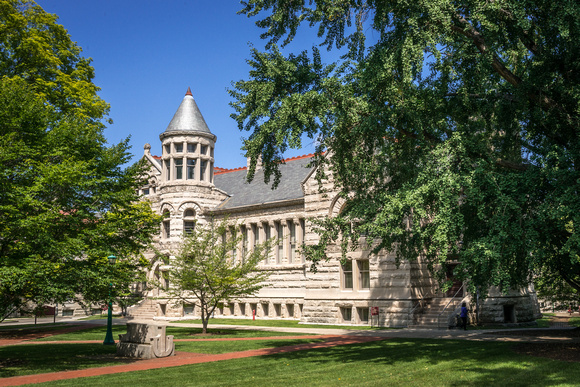 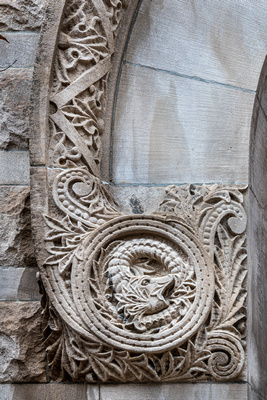 Maxwell Hall, one of the oldest, coolest buildings on campus, is part of the central quadrangle and one of the most interesting architectural gems, including a wealth of detailed carving incorporated into the ornate structure. A group of whimsical bat grotesques adorn the roof. (Grotesques are distinct from gargoyles, which are more functional, channelling water away from the roof). 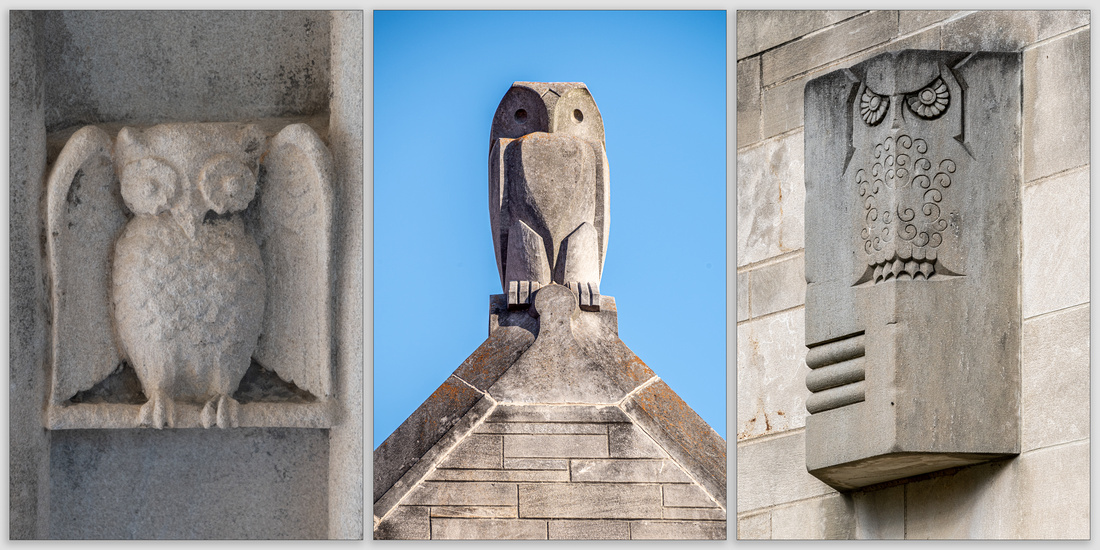 A few owls are scattered around campus, appropriate for academics as a traditional symbol of learning and wisdom. These examples also demonstrate the varied carving and architectural styles, which span many decades, including earlier Italianate styles through Art Deco and more modern eras. At first glance I thought the rightmost owl looked more like a rather sinister human face. 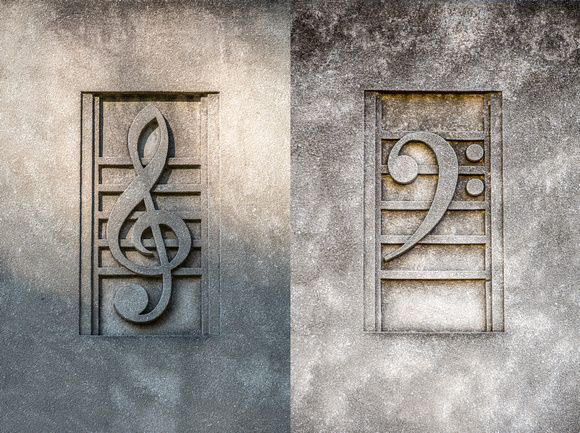 These symbols are pretty familiar, a treble and bass clef that adorn the original music building, Merrill Hall, home of the acclaimed IU Jacobs School of Music. 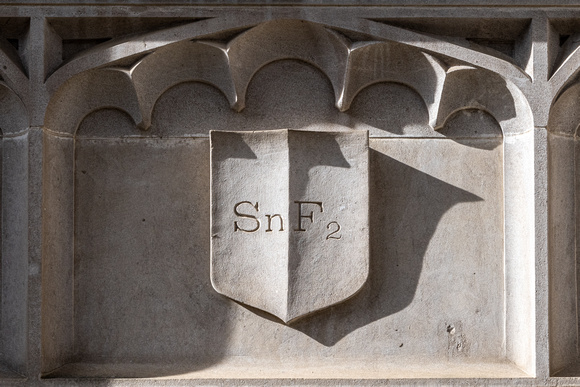 Appropriately, symbols of all the chemical elements adorn The Chemistry Building, but a few are more obscure. One of these is the chemical symbol SnF2 on the Chemistry building. This is the formula for a compound of tin (Sn) and fluorine (F), tin fluoride or stannous fluoride as it's commercially known, the compound in toothpaste that helps prevent cavities. Why would this be chiseled in stone on this building? It turns out that it was a couple of researchers at Indiana University who first developed and patented a safe and effective toothpaste formulation containing fluoride, after it had been shown effective against tooth decay. The patent was sold to Proctor and Gamble who in the 1960s created Crest, the first toothpaste to incorporate fluoride. There's a myth that the construction of another building on campus, Ballantine Hall was funded from the proceeds of Crest toothpaste. The reality is rather that the royalties from the patent were used to establish the Oral Health Research Institute at the IU School of Dentistry.
(https://www.myiu.org/stories/pride-and-tradition/true-or-false-myths-of-iu-fluoride/)

On the east wall of Simon Hall, a newer multidisciplinary science building are carvings adorning the windows. These represent six organisms commonly used in biology research: E. coli bacterium, mushroom, fruit fly, mouse, ear of maize and paramecium. In between is a sequence of letters representing part of the genetic code of mouse DNA. 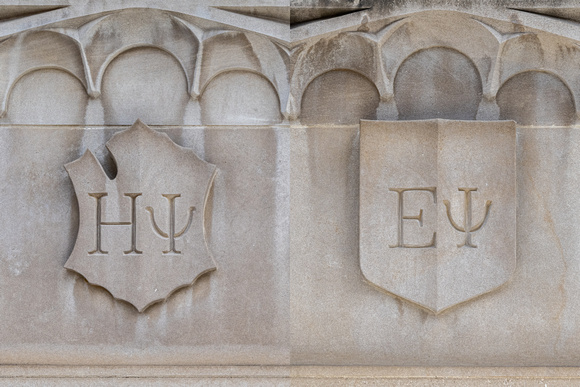 Even more obscure perhaps are the symbols HΨ and EΨ (with the greek capital letter Psi, coincidentally similar to the Indiana University logo) also on the Chemistry Building. These are part of one formulation for what's known as the Schrödinger Equation, a key component of quantum mechanics, one of the basic fields of modern physics and therefore fundamental to chemistry too.

There are many more examples of interesting, unique limestone carving at IU. You can see more in the IU Bloomington gallery. 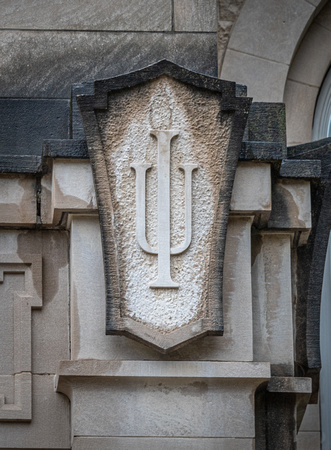