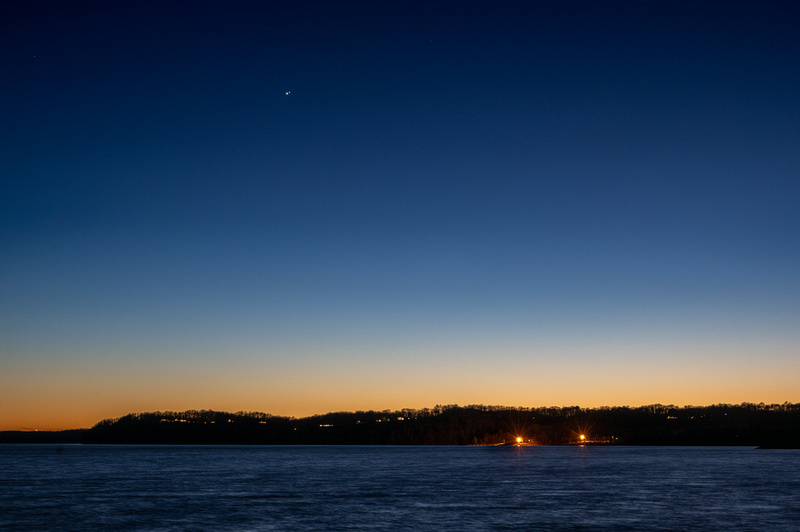 Normally the visible planets are far apart in the sky. They are of course all very far apart across many millions of miles of the Solar System. But since they all orbit in pretty much the same plane, they sometimes appear to approach each other, known as a conjunction in astronomy parlance. This was the case a few days ago, which also happened to be the winter solstice, when the sun reaches its maximum southern extent and the days are shortest in the northern hemisphere. This was the closest conjunction in many centuries so greatly anticipated, and hyped. I figured we'd be clouded out since it hadn't been clear for many days before, but the day before closest approach the sky cleared by dusk and we had a great view, as the bright the two bright points almost appeared as one just after sunset. It looked to me a lot like the photo above, appearing after sunset over Monroe Lake in Southern Indiana.

If you're interested to delve more deeply into this, including a perspective from the Hubble Space Telescope, check out the Illuminated Universe blog post.

I was also able to get some photos with a small telescope, good enough to show some detail in in the planets' disks and several of the moons of each but with both planets in the narrow field of view. This is not as simple as it sounds. Even though these planets are enormous — Jupiter is the largest in our Solar System — they are also immensely far away so they appear tiny, even with high magnification. Also, though the planets themselves are fairly bright, reflecting a healthy amount of sunlight, their moons are much smaller so appear as much fainter stars from our vantage point. I took photographs with different exposure times to capture this wide range of brightness and was able to composite together a reasonable view. 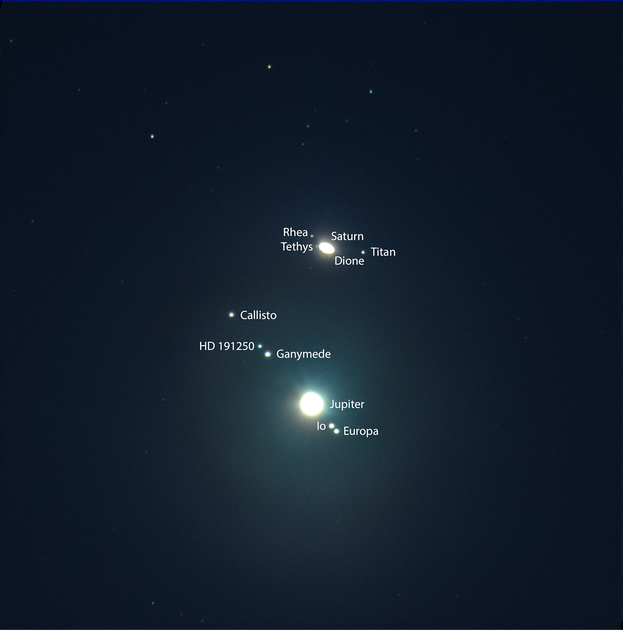 Jupiter/Saturn Conjunction December 20, 2020The great planetary conjunction, December 20, 2020, a day before closest approach. this is a composite of different exposures for the planets and the moons, Jupiter below and Saturn above. No, Jupiter didn't suddenly grow a fifth bright moon, that's a star (HD 191250) photobombing. Three of Saturn's brightest moons are visible in the first photo, but more are visible in the second longer exposure which also IDs them, along with some background stars.
Tech: Nikon D850, Celestron C5 (1250mm f/10), the left photo is a composite of 1/10 sec., ISO 200 and 1.3 sec., ISO 800; the right photo is a composite of 10 frames, 10 sec, ISO 1600, processed in Lightroom, registered and median-combined in Photoshop.

Here's one of the longer exposures. The planets are overexposed, but the moons are very clear, along with a few background stars. It was a little surprising to see what appeared to be a fifth bright moon of Jupiter, but it turned out to be a star that just happened to be in line with the actual four bright moons, known as the Galilean satellites, named for Galileo who was the first human to see them, through his telescope.

The next night was the actual closest approach and lo and behold it was clear again! Unfortunately it was also rather windy, which caused the camera and telescope to jiggle, making the images a little blurry (poor "seeing" in astronomer-speak). But again I was able to take photos and blend them together to show the planets, moons, and stars, all in a different configuration; Saturn had slid along relative to Jupiter, they both had shifted relative to the stars, and the moons had moved around their orbits. 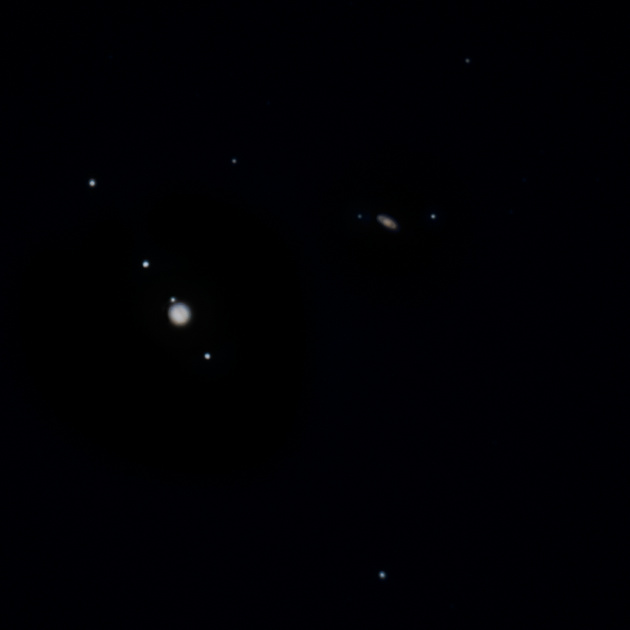 Jupiter/Saturn Conjunction December 21, 2020The conjunction of the planets Jupiter and Saturn on December 21, 2020, the winter solstice. It shows all four Galilean moons of Jupiter, the two brightest moons of Saturn, and three background stars, all labeled in the second photo.
This photo is a composite of several frames at different exposures to capture the planets and the moons. It was pretty windy though so the camera was being moved around enough that the photos aren't quite as sharp as they could be, but there is a bit of detail in the planets.
Tech: Nikon D850, Celestron C5 (1250mm, f/10), iOptron CEM25P drive; exposures: 1/25 sec., ISO 320, 1 sec., ISO 1250, 2 sec., ISO 3200.

The next day turned out to be clear again and I ventured out once more to catch the continuing slow-motion dance of the planets. This time the weather was more cooperative and the seeing was much better so more detail is visible on the planets. 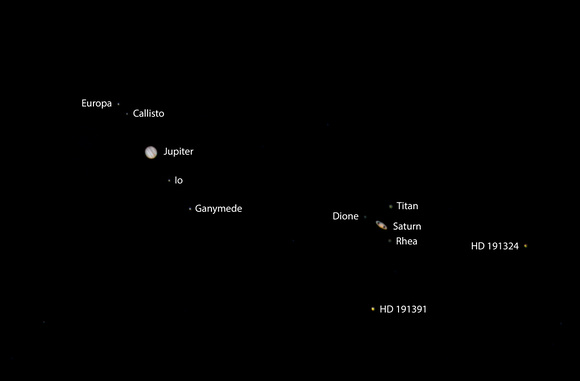 Jupiter/Saturn Conjunction December 22, 2020The Great Conjunction, still close in the sky. The conditions were much better this night, no wind and better seeing (jostling of the air) so I got some sharper images of the planets, likely the best I can do with the equipment at hand.
This is a composite of several frames with different exposures, combined to show the brighter planets and fainter moons well, along with a couple of background stars.
Tech: Nikon D850, Celestron C5 (1,250mm f/10), iOptron CEM25P drive. Multiple frames with three exposure times: 1/25 sec., ISO 250, 4 sec., ISO 4000, 8 sec., ISO 6400, processed in Lightroom, stacked in Photoshop (registered and median-combined).

Note also the relative position of the moons have changed, we can again see all four of Jupiter's Galilean moons and the three brightest moons of Saturn. These moons complete orbits in a few days, so it doesn't take long for them to be in very different positions, maybe a little easier to see in this view of all three nights.

These images are all composites of multiple varying exposures: shorter times to avoid overexposing the planets and longer times to capture the much fainter moons and background stars. In addition, I made numerous repeated frames at each exposure that were combined in order to reduce noise in the final image. While post-processing I was very surprised to see the trail of an aircraft passing right in front of Jupiter in one of the close-up frames through the telescope. It's very common to see aircraft lights trailed in long exposures in wider views of the sky at night, but much rarer to capture one in such a small field. 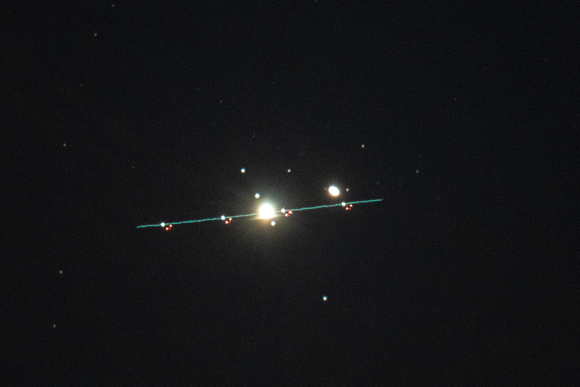 But that's not all. As long as I had the equipment set up, I thought I'd explore some of the other inhabitants of the outer Solar System that happened to be above the horizon at this time. These are much smaller and some more distant than the giants Jupiter and Saturn, but I thought it would be fun to make a gallery of sorts of these far-flung inhabitants of our corner of the universe.

First up is Uranus, centered in the photo in a field of stars. It's next in orbit beyond Saturn, known as an ice giant planet because of its composition and size. Uranus is bright enough to possibly be seen by someone with excellent vision in a very dark, clear sky but not by me. And it's not resolved here into anything more than a brightish star because it's smaller and much farther away than Saturn. But we can make out two of its brightest moons Oberon and Titania. Yes, Uranus's moons are named after Characters in plays by William Shakespeare. 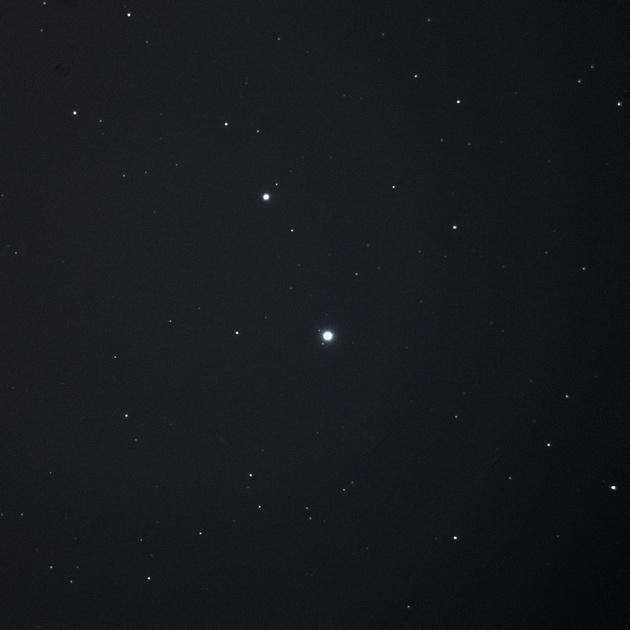 Planet UranusThe Planet Uranus, an ice giant between Saturn and Neptune and its brightest moons Oberon and Titania. (Yes, the moons of Neptune are named after Shakespeare characters.)

Next, beyond Uranus is Neptune, the farthest full-fledged planet, along with its brightest moon Triton. Also just a point of light, not visible without a telescope but bright enough to photograph. 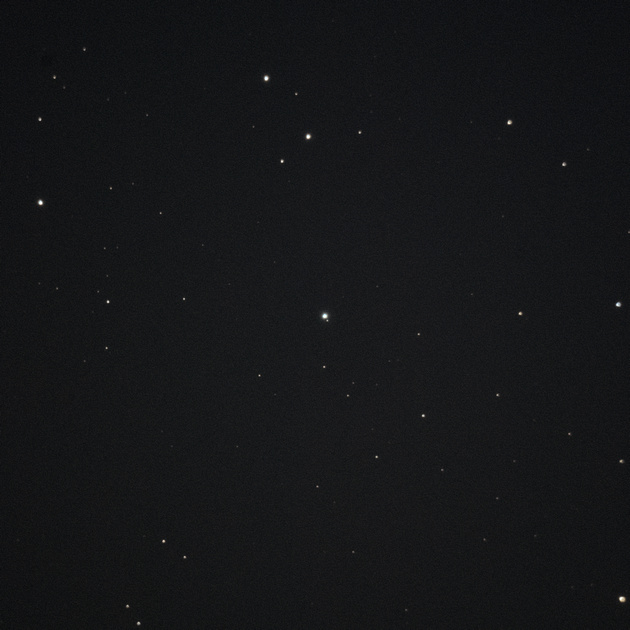 Planet NeptuneThe planet Neptune and its largest moon Triton, Deep in the Solar System between the orbits of Uranus and Pluto.

Finally there's Ceres, now classified as a dwarf planet, the first discovered and largest object in the asteroid belt between Mars and Jupiter. One of five dwarf planets now known, it's smaller than Pluto and smaller than Earth's Moon. Not a spectacular photograph perhaps, but it is interesting to be able to image such a small body add to the gallery of these relatively faint targets in the far reaches of the Solar System. 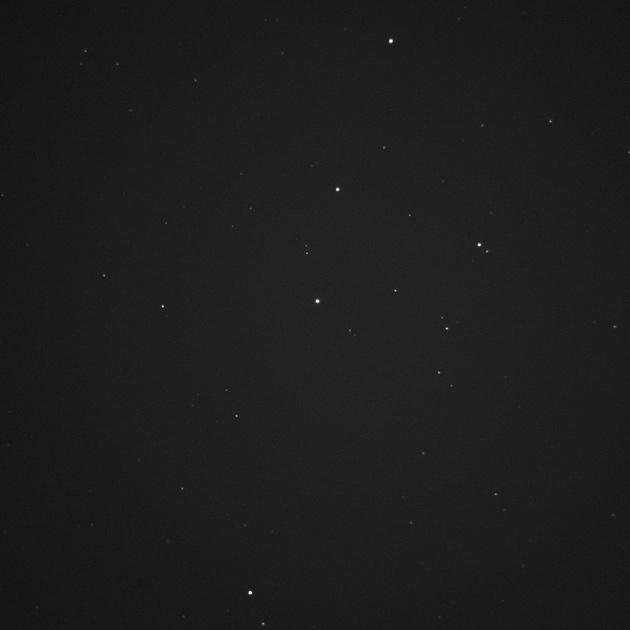 Dwarf Planet CeresCeres, the largest object in the asteroid belt between Mars and Jupiter, it is large enough to now be classified with Pluto as a dwarf planet.
A composite of multiple exposures, Nikon D850, Celestron C5 (1250mm f/10), 20 sec, ISO 6400, processed in Lightroom, stacked in Starry Sky Stacker.

Oh and just one more: our nearest neighboring rock, the Moon of course, which rewards with a whole lot of detail. 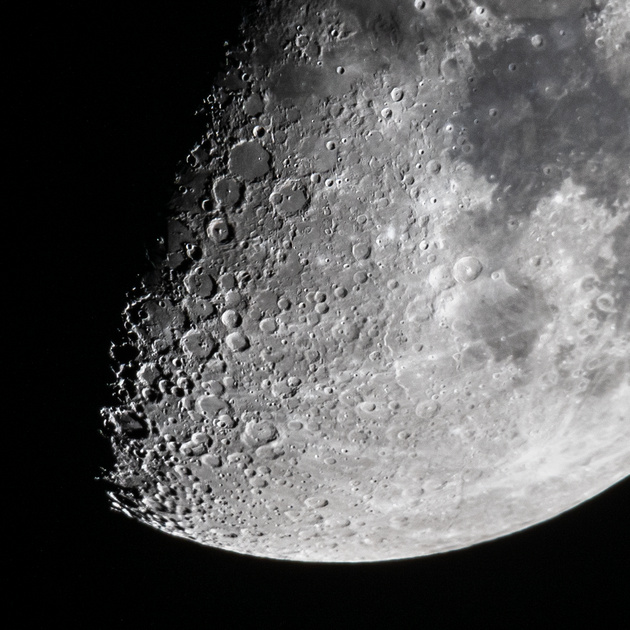 ashelybrown(non-registered)
These are much smaller and some more distant than the giants Jupiter and Saturn, but I thought it would be fun to make a gallery of sorts of these far-flung inhabitants of our corner of the universe.