There was a lot not to like about 2020, but certainly one bright spot was the appearance of Comet NEOWISE, the best comet in decades and the most exciting astronomical event of the year.

Comets are not really that rare, but mostly they are are very distant and dim, only accessible to those blessed with very dark, clear skies and powerful telescopes. Every once in a while one will be predicted to get brighter because of its intrinsic size and an orbit taking them close to the Sun and the Earth. But they're also fickle, predictions often fail to come to pass because we can't really study the small, icy cores in enough detail except with space missions to travel up close, and those are even rarer because of the difficulty and expense. A couple of comets got our hopes up earlier in the year, predicted to brighten to naked-eye visibility, but fizzled. One comet finally beat the odds though and put on a great show for about a month in summer for anyone willing to make a bit of effort, formally known as Comet C/2020 F3 (NEOWISE). (The conventional nomenclature is adopted by the International Astronomical Union to have an agreed-upon way of referring to objects in the sky. The more informal name (NEOWISE) is from the observer or institution credited with the first observation, in this case a NASA astronomy spacecraft.)

My first view of the comet was from outside the house when the comet was rising just before the Sun in early July, but it already had a prominent tail and bright coma (the envelope of gas around the small, solid nucleus).

A couple of days later I ventured to a location with a clearer eastern horizon to watch the comet rising through clouds above Monroe Lake, not far from home. Already the comet appeared brighter with a more prominent tail, though some of that was due to the better contrast against a darker sky since I could catch it lower on the horizon. 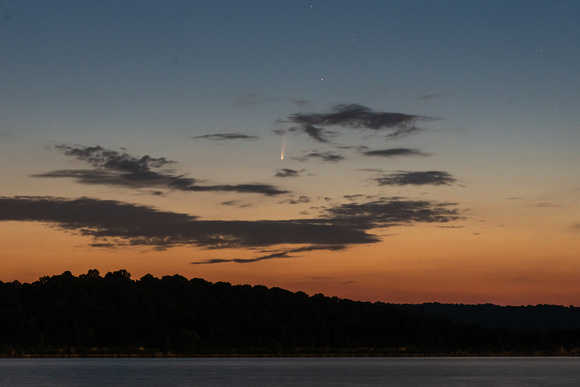 Comets do present a challenge to photograph well, even one as prominent as NEOWISE. There have been brighter ones, visible in daylight, but this wasn't one of those. Most of the time they are small in angular size so you need a long focal length lens, or choose to have a wider view with the comet in the context of a foreground landscape. Also, despite how they appear in photos, they are still pretty faint so you need deep exposures: long exposure times and wide apertures with fast lenses. The photo of the comet above Lake Monroe was taken at 80mm, 6 seconds, f/7.1, ISO 1600. The camera was mounted on a telescope drive to compensate for the motion of the sky due to the Earth's rotation.

We were fortunate to have clear skies for several mornings while the comet grew in brightness as its orbit took it closer to the Sun. Watching it was exciting, but a challenge to get up early enough, well before the early mid-summer sunrise to venture out to a suitable location, set up equipment and frantically photograph for an hour or so, then turn around and do it all over again for a few days in a row. 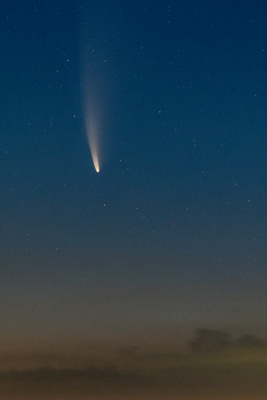 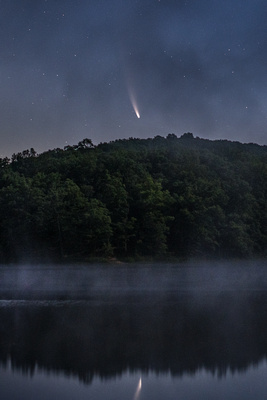 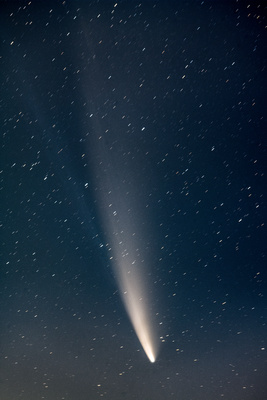 Comet C/2020 F3 (NEOWISE)I think this is the best I can do with this comet so far. I got up crazy early again this morning and headed back out to Brown County to watch it rise, probably the last time, hoping to get some deep exposures before the sky got too bright. (I will still be chasing it after sunset as long as the weather cooperates and the comet is still visible.) I was at an overlook on a ridge with a very clear northeast horizon and very little clouds or haze and the sky was very clear for an Indiana July.

The result shows a lot of interesting features. There are two tails, common in bright comets: the bright, curved dust tail of particles shed by the comet and the fainter, straight, bluish gas/ion tail, pushed back by the Sun's magnetic field and wind (comet experts please correct any misstatements). I see some additional structure, particularly in the dust tail. There's also some structure in the coma, the brighter area around the nucleus.

I registered the individual frames on the comet so the stars are trailed because the comet is moving through the solar system so does not track with the stars. Also the sky background varies because the comet was low on the horizon with some light pollution and early beginnings of dawn. I tried to suppress much of that gradient and even out the background to bring out as much detail as possible in the comet.

Now the comet began to swing around the Sun and couldn't be seen in the glare, but it soon emerged on the other side, visible in the evening after sunset, and still brightening as it came closer to the Earth. It was a little easier on the schedule, not having to wake up in the dark pre-dawn. This was the time during which I got the most detailed images, now sporting two tails. One tail is made mostly of small dust particles, reflecting sunlight and trailing along the comet's curving path, the other is mostly ionized (electrically charged) gas, blown back in a straighter line by the charged particles in the solar "wind", and with a distinctly bluer color. Also the coma, the glowing material around the unrresolved nucleus now showed a clear green color. At this time the comet was close enough that I could use a wider-angle lens, in this case zoomed out to 200mm to more than fill the frame with the long tails. 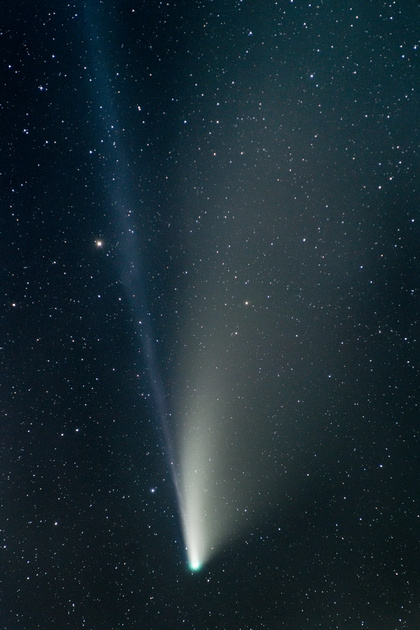 The comet was now in a darker sky which provided more contrast, making the faint tail visible quite far away from the nucleus. But this also required deeper exposures to capture the faint details, in this case: 20 seconds, f/3.5, ISO 6400. The longer exposure times made it much more important to use a tracking mount to follow the motion across the sky.

As the comet continued on its journey back out to the far reaches of the Solar System, it faded but still provided some interesting views. I caught it in the west after sunset over Strahl Lake in Brown County State Park, and happened to also catch a meteor in one of the frames. 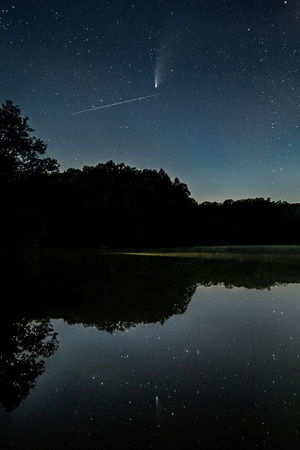 But that wasn't the only interloper. I tried to take as many exposures as possible in each session, combining them later in software to improve the dynamic range and reduce the noise in the final images. In many of these fairly long exposures, usually 30 seconds or so, satellites trailed across the field. Brightest was the International Space Station, crossing right through the tail of the comet (not actually the tail of course, the ISS is in a low orbit around the Earth while the Comet was millions of miles away). 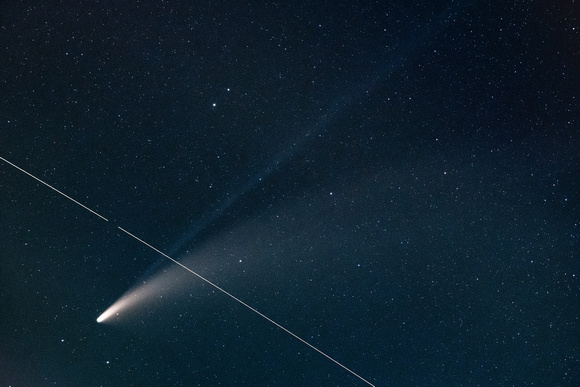 ISS Photobombs Comet NEOWISEHow's this for serendipity? The International Space Station (ISS) photobombs Comet NEOWISE. I didn't even see this last night but noticed it while post-processing a series of comet images and confirmed with SkySafari.
Nikon D850, 80-200mm @120mm f/2.8, two frames 30 sec. each, f/3.5, ISO 6400. The gap in the ISS trail is because the frames were separated by about a second.
#NEOWISE, #ISS

In another case, several of the new Starlink satellites passed through the field in a few frames, leaving parallel trails like a music staff. This photo is a composite of those frames and also includes another, brighter satellite. 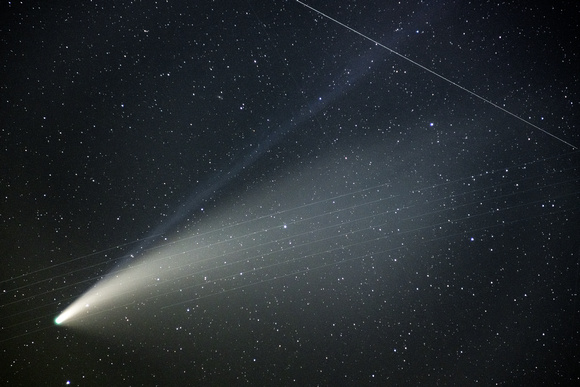 Fortunately, these sorts of trails disappear when combining multiple exposures. But more and more satellites are planned to be launched, thousands in the Starlink program alone, so will become a nuisance not only for making photographs like this, but for observations used for scientific research, though it's not clear how to balance the desire for faster, higher-bandwidth communication and other earth-bound uses with the needs of science. 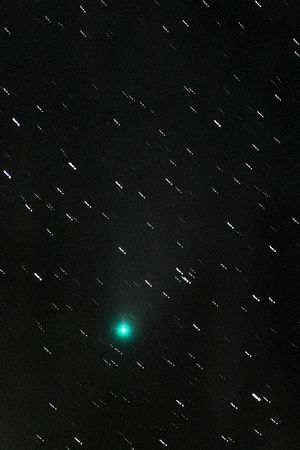 Finally, by early August the comet was no longer easily visible, even in binoculars. But I managed to capture one more view, with a long lens and deep exposures. There is only a hint of the formerly glorious tail and a relatively bright, green coma. (The color is due to carbon compounds energized by sunlight and producing light.)

In this photo several separate exposures (each 60 seconds, f/7.1, ISO 4000) have been combined, centered on the comet. The stars are trailed because the comet is moving relative to the stars; partly because of the motion on its orbit, but also partly because our point of view is changing as the Earth moves along its orbit (the apparent displacement is known as parallax).

It was an incredible experience to follow and photograph such a spectacular sky phenomenon, and I was very grateful that I could spend the time to take advantage of it and get some once-in-a-lifetime photographs, though it taxed my sleep schedule. It was also a pleasure to be able to spend time with some like-minded folks — safely distanced — on several occasions to do some serious photography.

Here's one parting shot, a panorama of the full arch of the summer Milky Way with the Comet NEOWISE at the left edge. This was made at one of the darker locations in southern Indiana, near the small town of Williams, which also is home to a very attractive covered bridge that appears on the far right of the photo.